Does coffee help with hangover headaches?

Coffee may have superpowers, but can it stop the dreaded hangover? 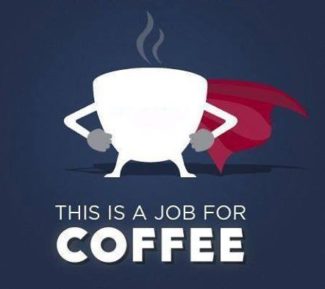 Some people see coffee for what it is: a caffeinated beverage that is loved by many people in the world. For an avid coffee lover like me, it’s more than just a beautifully infused concoction of caffeine and coffee beans. It’s a drink that has superpowers in preserving my sanity, uplifting my energy and making me a fully functioning human being for 18 hours out of the day. I don’t know how one drink can do so much for a person and their ability to function throughout the day (yes, I am a bit addicted).
Aside from being this ‘superhero’ of drinks that reigns in my sanity on a daily basis (that isn’t a joke), it is also claimed to have another ‘superpower’ for other, more unique, purposes. Some will say that coffee is also a cure for a terrible thing called, a hangover.

After a night out with friends for fun or for a celebration, you may wake up the next morning feeling a bit…sick. Rather it’s two or 10 drinks, a hangover is a nuisance that rears its head to remind us of our overindulgence from the night before. It’s also not something you like to tell people you have, as it’s not the most acceptable excuse for not feeling well. You are left to wonder what can you do to get yourself moving and feeling better with a quick turnaround. That’s where you turn to your beloved coffee as your one hope in saving your sanity (and possible your pride) before you face the day.

However, is coffee truly the hero that can help fight off the dreaded hangover that people think it is? Let’s take a look to see what kind of benefit coffee can bring to help alleviate your pain.

It’s all in the head

When you think of the symptoms of having a bad hangover, it usually coincides with some memory loss, an upset stomach and a pounding headache. One big reason you may get a headache is due to bodily dehydration. Drinking an exuberant amount of alcohol can lead to being dehydrated, especially if not enough water was consumed to balance the alcohol out.
Alcohol also greatly affects the hormone vasopressin; the hormone that helps our body maintain its natural fluid balance. Thinking back on your night out, you remember hitting the ladies or gentlemen’s room to relieve yourself quite a bit. All of those bathroom stops may have emptied your bladder, but it also emptied your body of fluid that kept it in balance. This process could be what lead you to have a pounding headache and some regret over the night before.

Coffee stop hangover. Proven method? Not so much

There isn’t any concrete scientific evidence on coffee curing the pangs of a hangover. While it may get you feeling more alert (it does have caffeine) and awake, it’s not going to actually make you feel better. Others mistake coffee’s ability to lessen the pain of a headache as proof of its superpower in curing a hangover.
If you drink coffee after a night out, you may find that your headache doesn’t feel as intense as it did before your cup of coffee. This isn’t because it was ‘cured’, but more due to the fact that it just weakened the headache you would have regardless of being hungover or not in the morning. Coffee will simply cure the withdrawal symptoms that your body feels when it needs its daily dose of caffeine, not because it actually helped with the effects of the hangover.
As an avid coffee drinker myself, I know that if I miss my cup of heaven (I mean, coffee) in the morning, a slight headache will form. This will happen regardless of if I consumed alcohol the night before or not, as it’s just a withdrawal symptom for not getting my much needed caffeine right away.

I am no expert, but…

As someone who drinks around four cups of coffee a day, and maybe a glass of alcohol twice a year, I don’t have much experience in understanding the best method for getting over a hangover. However, having suffered one or two hangovers in my whole life, I can say that coffee wasn’t my chosen method of getting better.
I believe coffee does assist in perking you up and in alleviating your caffeine withdrawal, but it’s not something that will get you back to feeling 100% immediately when you’re facing a hangover. I would stick to drinking carbonated beverages or ice water before I would drink a cup of coffee. Something tells me that would be easier on the stomach, especially if it’s already upset to begin with.

While I believe that coffee is a superhero in making me a fully functioning human being, I don’t believe it has the power to take away the symptoms of the dreaded hangover all on its own. It seems to be helpful if it goes hand-in-hand with medicine, but not by itself. Coffee may have superpowers in accomplishing many things, but in the case of a hangover, I think it’s just a trusty side-kick to the real hero, ibuprofen or Aspirin.